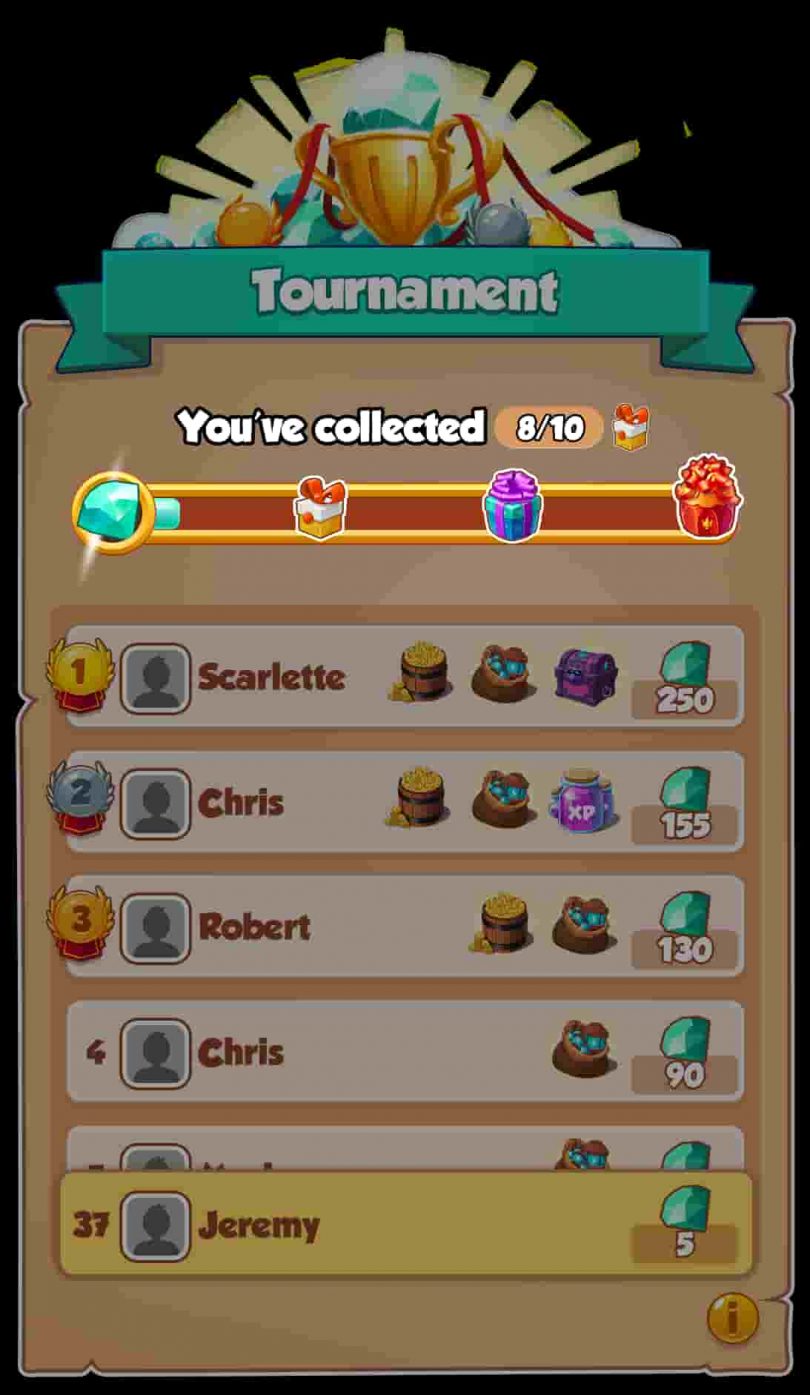 This new feature of the Tournament gives the ability to win incredible rewards while competing for the top ranks on the leaderboard!

A progress bar with a number of rewards will appear presenting the opportunity to win several rewards with items such as Spins, Coins, Pet XP, Pet Treats, or Gold Cards. Each tournament milestone bar can be completed a number of different times as displayed above the progress bar.

Tapping on each reward on the bar will show it’s contents as well as how many points are needed to collect it, and tapping on the tournament icon on the left side of the progress bar will show the final reward which can be won.

Coin Master is ready to challenge you in the new Tournament! ⎼ a fun new multiplayer event that allows players to compete with one another and track each others’ progress LIVE!

Players are split into groups of 50 and compete to become the number 1 Coin Master on the Tournament Leader-board!

In order to join the tournament, each player will first need to earn a certain number of Tournament Icons by fulfilling various actions including Attacks and Raids.

Every action completed will be reflected on the trophy icon seen at the top right corner of the screen! This number will represent your rank on the leaderboard where you will also be able to see your potential rewards as well as the stiff competition ahead!

A new and exciting event in the Coin Master universe – Gift Master!

Any purchase of a Coin or Spin pack with a “Free Gift” icon will reward the player with an incredible gift!

These remarkable gifts can contain combinations of Spins, Coins, Chests, Pet Food and even Pet XP!

What will you get? Let’s find out!

These Special events bring the fighting spirit to Coin Master!

The extravaganza events are challenges with many new and exciting missions! Increase your progress by Attacking and Raiding your fellow Vikings! Attacks will count on the progress bar even if they are blocked by Shields or the Rhino and even earn you extra points along the way!

Spin to get 3 themed icons in a row to increase the progress bar and advance faster to greater and greater rewards!

The Attack Master event adds a whole new rewarding experience to Attacks! During this event, each Attack on another Viking’s Village will move you closer and closer to amazing rewards! Each stage of the event has increasingly higher goals and greater rewards.

Attacks will count up on the progress bar even if they are blocked by Shields or the Rhino.

The Raid Master event brings an even greater experience to Raids!

During this event, each Raid on another Viking’s Village will move you closer and closer to amazing rewards! Each stage of the event has increasingly higher goals and greater rewards.

The Village Master event is an incredible way to celebrate your progress!

Each Village completed will earn players rewards that no other event promises! The further your progression in the game, the greater the reward you will receive!

The Bet Blast Event blows your winnings out of proportion with higher Bets and bigger rewards!

Blast through Villages, Raid your friends, Attack your rivals – all with outrageous Bets and astronomical rewards!

During the Cards Boom event, each Chest will reward players with 50% more cards every single time!

In this event, the Wooden Chest will reward the player with 3 cards, Golden with 6, and Magical with 12!

During these very special events, players will have the ability to trade two Gold Cards which are shown in the pop-up.

This is a perfect opportunity to finish card collections as well as to help friends in their mission to finish their own collections!

The Jackpot is a Lottery Coin-Master-Style! Spin using higher bets with the chance to win huge coin Jackpots!

Please note that to qualify for the Jackpot, Bets must be used!

The Balloon Frenzy event is a fun and easy mini-game within the game!

Stay focused while spinning and interacting with your Village and pop the Balloons that float by to earn rewards!

The Viking Quest is a game within the game that allows players to spin the new Viking Slots with their Coins instead of Spins and earn astronomical rewards!

Tapping on the reward icon near the bottom right of the screen will open the Mission Map which shows the players progress through the 10 unique and exciting missions!

Tapping on any rewards icon on the Mission Map reveals the items inside which offer greater and greater rewards including Gold Cards!

All Coins won in the Viking Slots are Raid Protected for 3 minutes after each press of the Viking “Spin” button.

When playing the Viking Slots, the Mission can be seen above the Spin button.

For example:
If the Mission states “Win 12.5M Coins” it means that the player must earn 12.5M Coins while spinning the Vikings Slots in order to receive their reward:

Viking Quest is divided into two different types of missions:
Regular and Bonus.

Regular missions simply require the player to earn a certain amount of Coins in order to receive a reward.

The Bonus Wheel mission will test the player’s ability to earn the stated number of coins needed by hitting three “Bonus Wheel” icons in a row as shown in the video below:

With any other combination the progress bar will not move, but instead count Coins to your balance to help you continue playing!

All Coins won in the Viking Slots are Raid Protected for three minutes after each press of the Viking “Spin” button.

Set Blast is the ultimate Card event in Coin Master!

Each Set that is completed during this great event rewards players with higher rewards!