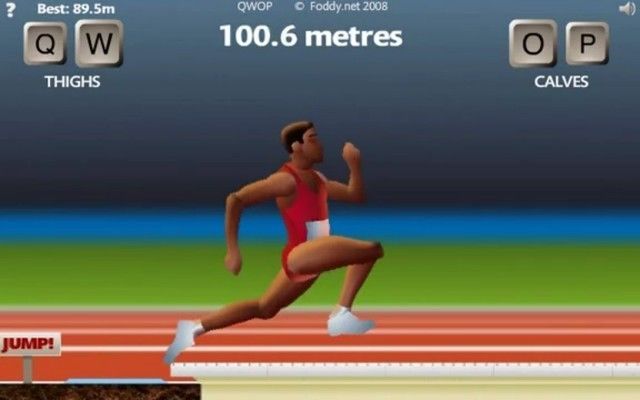 The game is challenging and demonstrates the complexities of human mobility. And we’re gonna tell you how to beat QWOP so you can run smoothly.

The player takes control of an athlete named QWOP, who is a local athletic hero in a wealthy Scandinavian country.

QWOP isn’t a very good runner, as seen by the purposefully inadequate controls, due to little funding. The game is difficult to play because it needs superb finger coordination.

When one of the athletes struggles with the controls, the athlete swings or squirms, and at times even performs a backflip.

The game just only four buttons to play, yet it is 400 times more difficult than jogging in real life. Let’s take a look at some of the game’s fundamental controls, as well as some methods that will show you how to beat qwop like a pro.

How to Beat QWOP ?

Understanding the stances needed in a real-life run is the most straightforward method to succeed in QWOP.

You can control your thigh movement with Q and W buttons.

O and P buttons are to control the calf movements.

After you know the functions of each button, now let’s move on to how to beat QWOP and run as smoothly as you can.

First, press the ‘O’ button to lean slightly forward. After that, press ‘W’ ‘O’ and ‘Q’ ‘P’ alternately take your strides. Make sure you stay leaning slightly forward. Don’t wait until your front foot hits the ground before you take your next stride, push off a little earlier.

You may not able to master this in an instant so be prepared to fail and keep practicing this technique.

In 2011, the game’s iPhone version was released. The gameplay is the same in the App version as it is in the original edition, but the controls are different. By sliding their thumbs around in the diamonds on the screen, the user may control QWOP’s legs and arms.

After being presented at an event in Austin called “The Foddy Winter Olympics” featuring a selection of Bennett Foddy’s games, a 2-player multiplayer version of QWOP called 2QWOP was launched in February 2012.

This version puts the game in vertical splitscreen and assigns the Q, W, E, and R keys to one player’s thighs and calves, while the U, I, O, and P keys are used by the other.

Despite the fact that QWOP’s primary objective is simple, the game has been criticized for being difficult to learn owing to its Q, W, O, and P key commands.

Foddy claims that he receives a lot of hate mail as a result of producing QWOP.

Despite the game’s complexity owing to the controls, the game helped Foddy’s website gain 30 million hits, according to Wired Magazine, and has been played by millions of people ever since it was published, but numbers have fallen.