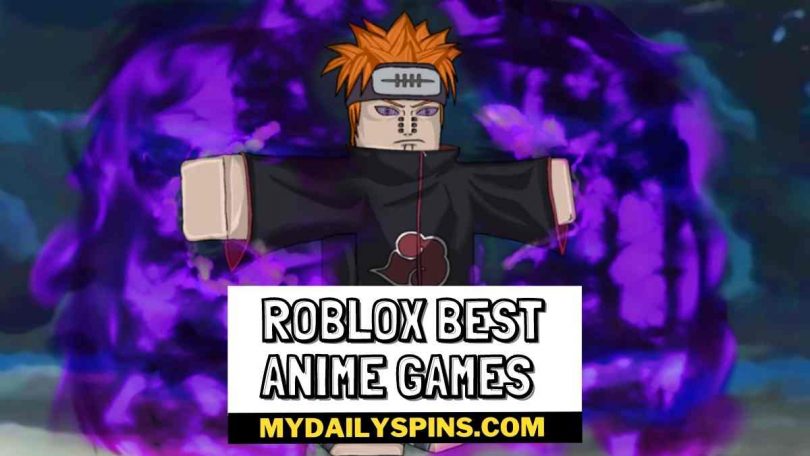 Anime games are among the most played games on Roblox, also simulator games and Roleplay ones.

here in this post i listed 11 of best anime games on roblox, some of them inspired from one piece, others from naruto. and others took anime characters and merged them into one game.

Here i put a list of Roblox anime games along with games information and the anime it was inspired from:

Grand Piece is ROBLOX game developed by Grand Quest Games. the game is also based off the famous shounen One Piece

The goal of the game is to discover hidden islands across the ocean, Search for treasure and rare fruits known to empower their potential, challenge imposing bosses, and both form and shatter crews. Your path is your own.

Related Articles you can check: Roblox GPO codes has the latest free rewards and codes.

Blox Fruits is inspired by the famous anime One Piece.
The goal of the game is to Become a master swordsman or a powerful blox fruit user.

In the game you will have to train your abilities to become the strong.And you can choose to fight against tough enemies or battles against top bosses. all while sailing across the ocean to find hidden secrets.

Your Bizarre Adventure is an RPG style game. it revolves around getting strong & unique spiritual abilities known as STANDS. Also you have to finish quests and fight gangs, and much more!

the game was released on March 2021, but it’s getting a lot of attention from Roblox Players.

Shindo Also called Shindo Life is a Roblox game developed by group RELL World. It is ispired by the famous anime Naruto.

The Naruto-style game is taking place in a world like the anime.
the game was called Shinobi Life but got deleted, and changed its name due to copyright laws.

You can check new Shindo codes for free spins.

All Star Tower Defense is another Roblox game inspired by anime characters.

This game is not tied to particular anime, but instead it has characters from all top famous anime series. like One Piece, Demon Slayer, Naruto and more..

You can check ASTD codes for free rewards. and check All Star Tower Defense characters Ranking to get an idea about the characters.

Anime Fighting Simulator is a Roblox game, that is inspired by many popular Anime shows.

The goal of the game is to train your body and mind to become the strongest fighter. Unlock swords and powers to defeat your foes. Explore the map to hone your power. Whatever you do, the world is yours for the taking.

King Legacy is a Popular game that is based off the popular long-running manga series, One Piece.

Check King Legacy codes for free game rewards that will help you advance in the game quick.

Demon Slayer RPG is a based on the popular anime series Demon Slayer created by Koyoharu Gotouge.

The goal of the game is to Slay the Evil Demons of the night or betray humanity for more power. Fight, Explore, and grow stronger as you discover new abilities and techniques. Journey into the night, either alone or with your friends.

Check Demon Slayer RPG codes before playing the game to get a head start with free rewards.

The game is still fairly new as it was launched on March 2021 but it is getting popularity among Roblox players.

Last Pirates is another game that inspired by the famous anime series One Piece.

the game was created on 2021 but it already has over 20 Million visits,