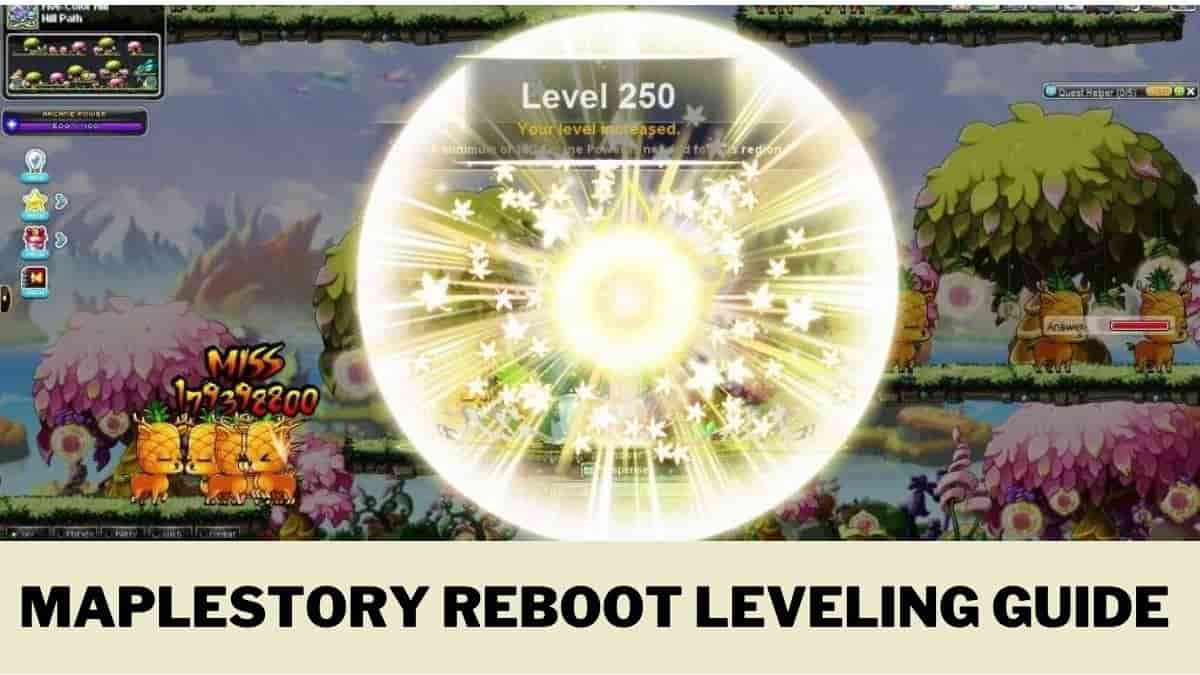 If you are a lover of this classic MMORPG, and you are looking for a Maplestory Reboot Leveling guide or training guide, then you have come to the right place.

I have put together this well structured Maplestory Reboot leveling guide which if you follow, you should easily level up in no time. Without further ado, let’s get to it.

Maplestory Reboot Leveling nowadays is certainly much easier especially if you are on reboot. Of course, I will start from level ten onwards as the first ten will require you to get through starter quest lines (tutorials).

You will then go through your first job advancements. This will be so much easier if you have a Hyper Teleport Rock, so you might want to use some cash and get one.

The reason it is much easier in the reboot server is that Nexon has removed most pay to win elements of the game, making it less easy to level up. However, monsters in the reboot server have a higher XP thus causing 5% damage loss per level. Now I will get straight to the Maplestory Reboot leveling guide giving you a general overview of the best training spots.

You can fight bosses here to gain good experience, that is once you are able to reach this level

Level 105+: Monster Park REBORN (Daily Entry limit of 2 PER WORLD. The game allows a player to purchase tickets with reward points from the cash shop. A player is limited to twenty tickets a month)

Level 180+: Madman Ranmaru (Decent Funding Required, newcomers will not be able to face this boss)

Level 180+: Pink Bean (Can take moderate funding to kill, but will consume A LOT of time) –

Now that you have an easy guide to follow, let’s look at some of the frequently asked questions about Maplestory.

These are some of the frequently asked questions about Maplestory

Does Maplestory have reboot?

Yes, Maplestory does have a reboot server where Nexon has removed most pay to win elements in the game. This certainly makes leveling easier, but it takes a lot of time as well. Basically, you will have to grind hard to farm for Mesos instead of paying for things like in the normals server. Players in non-reboot are however awarded more in the points shop with items such as additional inventory slots, exp coupons, pet food and even more.

Is Maplestory reboot better than Non-reboot?

Well, it depends, some people prefer the reboot version, others prefer the normal servers. In normal servers, you have to pay money rather than spending hours farming for Mesos. Some will argue that it is far easier farming for Mesos especially if you have pets. So if you have money to spend, you can go for the normal servers which take less time to progress. If you do not have extra cash and have time on your hands to farm for Mesos, then you should probably go for the reboot server.

Why is the Maplestory reboot popular?

I guess this is pretty much straight forward, it’s not costly. Players can farm for Mesos which people will find much more convenient than shaving to actually pay for it. The only thing that you will need is the time because it requires a lot of grinding.

Is MapleStory reboot worth playing?

Of course, the game is still worth playing, especially if you are still fond of this classic. As I said earlier, it doesn’t require you to spend so long as you put in time and effort to farm for Mesos.

Well, the game is certainly different from the original. The developers changed it from a side-scrolling game with pixel graphics and embraced the modern block-like look which is more popular with sandbox games today. The game involves less grinding than the original and focuses more on the story quests which are mandatory for your player to level up.

Why did MapleStory 2 die?

Unfortunately, the game servers for this sequel of the original classic were shut down for good on May 27, 2020. The reason for the shutdown is that the game did not live up to its expectations, and that came as bad news to die-hard lovers of this game. However, the original game is still online which is good.

Is Maplestory still popular in Korea?

As of 2018, Maplestory was the 4th most played in Korea, so yes it is still popular. We have to certainly hand it to the developers for keeping the game alive for that long. Of course, they have to constantly update the game, adding patches and events.

What is the best class in MapleStory?

There are basically five roles in Maplestory : Warrior, Mage, Thief, Archer, and Pirate.The best classes in each role are: Blaster for the Warrior role, Kinesis for the Mage class, Nightwalker for the Thief role, Pathfinder for the Archer role and Angelic Buster for the Pirate role.

Is Maplestory M worth playing?

Whether you still enjoy playing the game or doing it purely out of nostalgia, Maplestory is definitely worth playing. It is a game that can keep you busy and emotionally invested for a couple of hours at least. Ultimately, whether the game is worth playing is entirely up to you. This being said there are quite a number of people that still play it to date and its community never seems to die.

Well, folks that was a brief summary of the Maplestory Reboot Leveling Guide. You can also check out this Maplestory Skills guide or this Maplestory cubing guide for additional info. Happy grinding gamers.