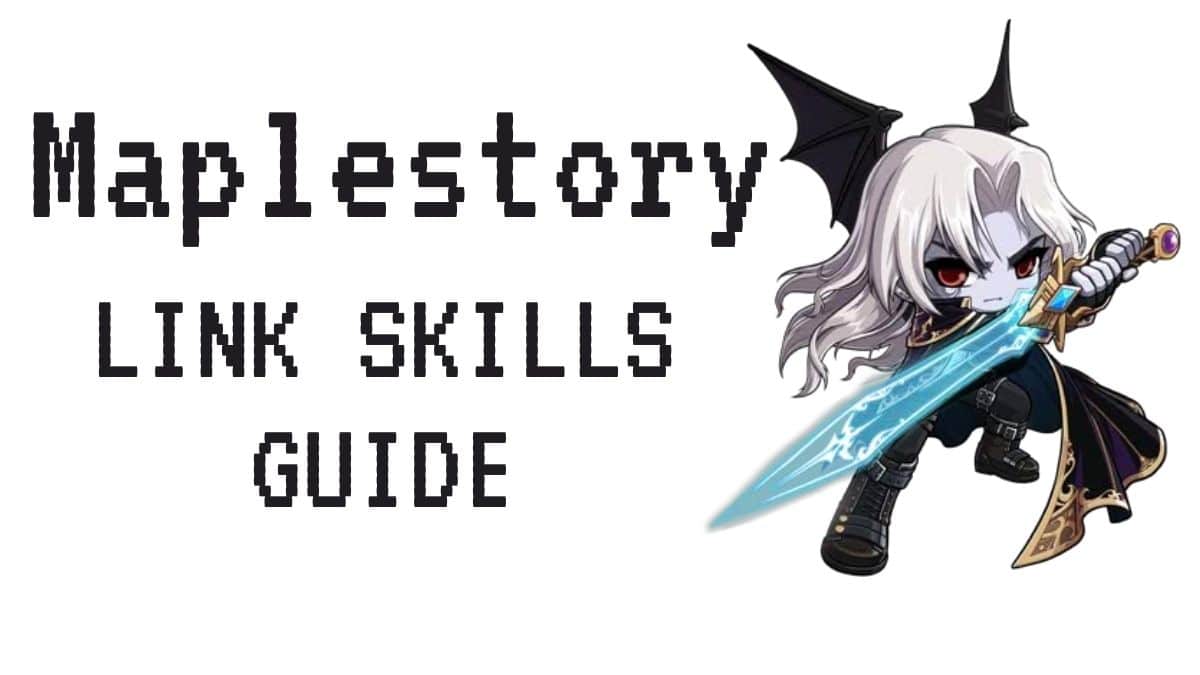 Maplestory Link Skills can be unlocked at level 70, 120, and 210 (for some characters). Link skills are buffs you can link to other characters within the same server of your account. You can only send a link skill buff to one other character at a time and last until you link it to another character.

You can use the skills in other characters you have in the same server when you level up Link Skills. They are among the best ways to improve your characters’ damage, stats, and survivability for free.

At one time, a character can receive up to 12 different Link Skills. With so many different ones available in the game, you might be asking which Link Skills are the best and which ones you may want to obtain first.

Here are the MapleStory Link Skills ranked in order from best to worst for you to be guided.

Bear in mind that the Link Skills ranked lower aren’t necessarily “poor,” it only indicates that there are better skills compared to these skills.

Use this MapleStory Link Skills guide to help prioritize which ones you might want to get first.

Wild Rage gives +15% Damage, which is simply the best Link Skill in MapleStory. Damage is the end-all-be-all stat in MapleStory, so a flat out percentage-based damage boost is terrific.

If you want to prioritize Wild Rage and Elementalism for your first two Link Skills, be sure to equip a Demon Avenger and Kanna to the required levels.

It is no surprise that these two got the top spots because the damage is the most significant stat in MapleStory.

The third place for MapleStory Link Skills goes to the Spirit of Freedom. After respawning from death, it gives up to 8 seconds of invincibility. In fighting bosses, you always have the risk of getting spawn killed, which is the best boss skill to have in these situations.

That difficulty goes away with this skill and provides you eight full seconds to rebuff and reposition yourself.

You will want this Link Skill in your back pocket if you plan on fighting bosses.

Ark’s Ecstasy is the same as Ilium’s Flow of Battle. It’s a stacking Link Skill that caps out at +16% damage. However, instead of roaming around to stack it, you simply have to attack something.

It’s ranked higher since it is more reliable and a bigger buff than the Flow of Battle.

The flow of Battle is also a stacking Link Skill that maxes out at +12% damage. It’s the easiest way to stack, since all you have to do is walk around, and the damage buff is consistent and significant.

The Judgment gives up to +4% crit damage. Although it looks like it’s not enough, when we’re talking about total damage numbers in the tens of millions or more, it adds up quite a bit.

Since critical damage is the second last calculation to occur when assessing total damage, it’s more significant than base attack or boss damage buffs.

Focus Spirit is a combination of a lot of other Link Skills. It provides you better critical rate chance, boss damage, and HP & MP boost.

It gets a higher spot on this ranking list since it’s more versatile than the other Link Skills.

Being able to burst +20% extra boss damage from Fury Unleashed is a great deal, given that MapleStory is all about late game bossing.

The Hybrid Logic boosts all stats by +5-10%. A pretty weak Link Skill, but still very reliable on every class other than Demon Avenger.

Adele is the new class in MapleStory, and it looks like she’s going to be pretty intense. Her Link Skill, Noblesse, boosts damage by 2-8% based on the number of party members you have up to 4 members.

It also increases boss damage by 5%—a great skill to have whenever you’re in a party or bossing.

Reject 10-20% DEF with the Light Wash Link Skill. This is higher than Terms and Conditions because it’s a permanent passive that you can use in the game.

Hoyoung is an entirely new character class. His Link Skill gives 10% to ignore DEF and 12% damage boost when striking monsters with full health. The skill is weak against bosses, but it can be useful for mobbing to help you one-hit KO monsters you usually couldn’t.

Terms and Conditions massively increase the damage for 10 seconds. Although it sounds insufficient, a +60% damage increase is quite the improvement, especially for classes that depend on burst damage like Dual Blades, Luminous, and Night Lord.

The skill is still a good option for every DPS character.

Phantom Instinct delivers you a 10-20% boost in the Critical Rate chance. Critical hits do significantly more damage than regular hits, and very few classes can attain a 100% crit rate chance on their own, which makes this Link Skill highly relevant.

Hayato’s Keen Edge is the same with Cannoneer’s Link Skill, but swaps out HP and MP boost for Weapon and Magic ATT.

This is much more useful and would typically cost a lot of mess or cash to replicate.

Elven Blessing is the best Link Skill to speed up training. It furnishes a permanent 10-20% EXP increase from monsters and enables you to teleport to Elluel every 10 minutes.

Rune Persistence increases rune buff duration. You can use this to buff the period of exp runes such that they’ll last 4-5 minutes, which is significant.

The next three Link Skills will help you train and level up much faster. They’re all worth obtaining if you have the time.

With Intensive Insult, you deal more significant damage to monsters lower level than you and monsters with any status conditions.

This Link Skill isn’t that great unless you’re playing an unfunded character that has to depend on mobbing lower level monsters.

It’s weak against bosses since they’ll usually be the same level or higher than you, and bosses don’t typically have status conditions.

Rhinne Blessing improves your defense penetration and reduces damage taken, but this does not apply to % HP attacks.

The fact it doesn’t apply to % HP attacks makes the Link Skill pretty weak, and rejecting 10%, DEF is negligible.

Mihile got revamped such that they have their own Link Skill and one that other characters get.

Knight’s Watch is impressive for classes that don’t have innate stances like Night Lords, Archers, or Mages.

Still, in the other classes, it’s useless. So it relies on what types of characters you’re playing.

Pirate’s Blessing also boosts max HP, along with MP and all stats. But even though it’s a decent version of Iron Will, it’s still an acceptable Link Skill.

This is likely because Cannoneers were the first class to have Link Skills, so it’s a little outdated.

Iron Will improves your max HP. Max HP is mostly an insignificant stat late game except if you’re playing a Demon Avenger.

Anyway, every boss does percent-based damage on your character’s HP. Moreover, getting potions is such a breeze in Maplestory now that you don’t need more HP.

Similar to Close Call, Core Aura is too unreliable of a Link Skill to be that great. It boosts all your character’s stats by a random amount, which you can improve with cash items like Cosmic Stone and Supernova Dust.

So it’s instead a pay-to-win Link Skill. Unless you have loads of money to use, you’re better off spending it on other cash items first.

You’d think Close Call would be a useful Link Skill to have since it can save you from death. However, you really can’t rely on it, and you never want to put yourself in a situation where you have only a 5-10% chance of surviving death in the first place.

It is best if you try to dodge attacks as much as possible.

Cygnus Blessing used to be among the excellent Link Skills in the game back when status resistance was measured as a percentage chance of preventing damage entirely.

As a result, Cygnus Blessing is rated lowest on this list.

Q1. Is Global MapleStory available anywhere in the world?

Q2. Job advancements are available for what levels?

Q3. Can I move purchased items from the Cash Shop between characters?

Cash Inventory is only shared with explorers, and all other classes have Cash Inventories individual to each character. MapleStory occasionally holds Cash Inventory transfer events, allowing you to move your Cash Shop items between characters on your account who are in the same world.

Q4. Can I give packages to other players through Donald or other means?

With the Big Bang update release, player to player item delivery was removed. Donald is only available for official communications from NEXON.