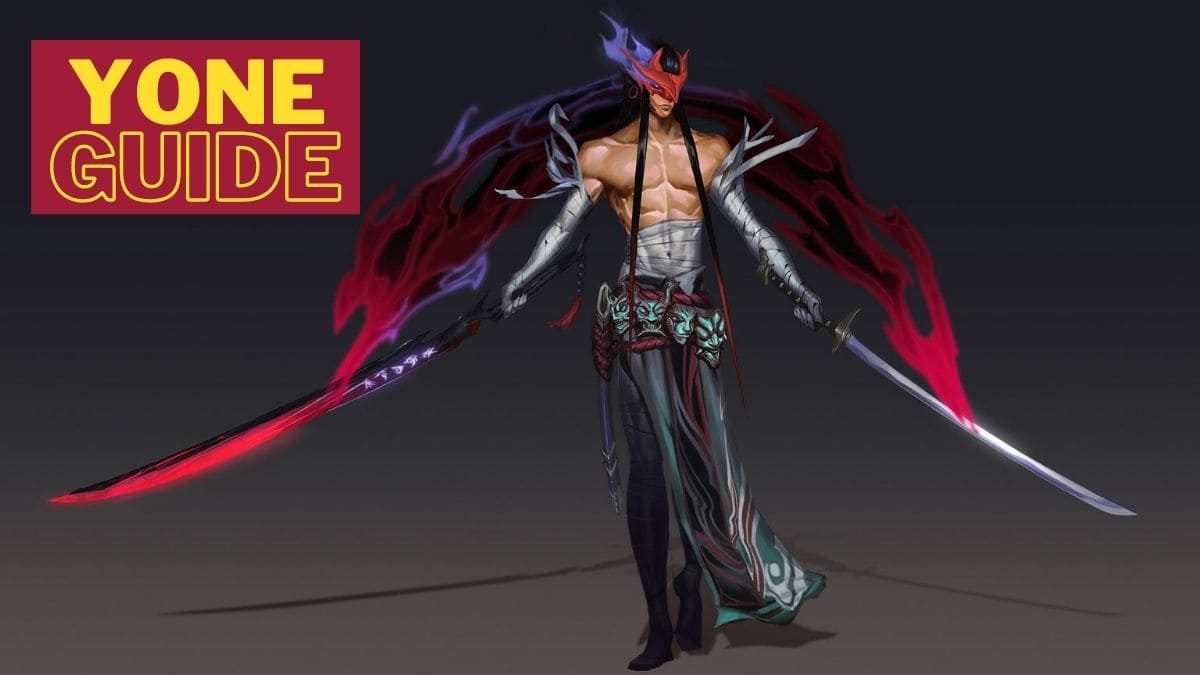 In this Yone guide you’ll learn EVERYTHING you need to know to skip normals and make your debut in ranked while avoiding that genetic 0-10 power spike.

All you need to know is right here starting with: Abilities Playstyle Combos Tips and Tricks Runes, Builds, Skill Order.

Okay, we covered his Yone’s abilities in our first impressions video, but we’ll quickly go through them again in case you haven’t seen that.

His passive is simple. Just like Yasuo he gets double the amount of crit chance from crit items.

His Q is exactly like Yasuo’s. He stabs in front of him dealing damage and gaining a stack of Gathering Storm. At 2 stacks, his next Q will instead cause him to dash forward unleashing a whirlwind knocking everyone up in it’s path.

Lastly, this ability’s cool-down shortens as you buy attack speed, once again exactly like Yasuo’s Q.

His W swings his sword in a cone in front of him. This slash deals a bit of base damage and a percentage of maximum health damage.

Lastly, just like his Q, the cool-down goes down as you buy attack speed.

His E is his trickiest ability by far. Yone leaves his body behind and dashes forward. After 5 seconds, Yone is forcefully dragged back to his Body. Of course, he can reactivate the ability at any time and choose to go back faster. During this time, Yone gets ramping movement speed the longer he stays out of his body.

He can apply the mark to as many champions as he hits .

Lastly, his ultimate. After a brief delay, Yone quickly dashes forward. If he collides when an enemy champion, then instead of going the full distance, he’ll stop right behind them, knocking them up.

If he hits multiple champions along his path, he’ll stop behind the last enemy champion hit and bring everyone else with him knocking them all up.

Yone will actually function very similarly to an assassin for most of the game. He’ll be looking to do short burst trades during the laning phase with his E.

But he functions much better than your typical assassin with this ability. Generally, when a melee champion goes in, they have to commit hard. But Yone can just dip back out after he’s done his damage never leaving him exposed for counter-attacks.

Not only that, but his damage is insane considering how safe he is while doing it. He can 100-0 players, if he lands a full rotation on them with his E.

That’s not to say this doesn’t come with its own share of drawbacks.

Yone has very few escape tools. While he does have very safe and reliable trading with his E, if he’s caught out, then he’s very vulnerable. Almost exactly the same as Zoe is with her R.

His assassin play style can persist all the way to late game. Once you have 100% crit with 2 items, you should constantly be looking to see if you can E towards an enemy carry and instantly delete them, before zipping back to the safety of your body.

That being said, he can also function as a bruiser type champion, much like Yasuo does. This is usually only possible if he’s really ahead, and isn’t going to be in danger by going into the thick of things, which would normally be bad, since he has no escapes.

In cases such as these, instead of using your E as a gap closer, you can look to use it mid fight to instead dodge critical abilities and potentially outplay your opponents.

Lastly, don’t think that Yone needs to be the aggressor in every situation. Sometimes, he will have a hard time finding a good engage.

If you’re ever in doubt, peeling for your own team with your ultimate is actually very impactful. Typically, the enemy funnels trying to kill your other carries, setting up your otherwise hard to land ult quite easily.

Alright, there’s a few combos you’re going to need to know to play Yone. First, you need to be aware that Yone’s Q has another slight difference from Yasuo.

When Yasuo presses his ultimate, he loses all the stacks on his Q, and he must re-stack them.

Yone on the other hand keeps his stacks. Knowing this, one of Yone’s strongest combos is using his ultimate to clump up a bunch of players and then hit-confirming them with another knock-up afterwards.

Next up is Q flash. Remember his 3rd Q causes him to dash in a direction knocking everyone up along the wind’s path. You can animation cancel this with your flash, much like Ahri’s Charm Flash. Notice where the mouse is hovered. Yone presses Q there, chooses his flash location, and the dash heads towards the initial mouse location.

Never underestimate the power of animation cancelling. Making your abilities come out faster and giving your opponents less time to react is always a surefire way of guaranteeing that they land. That version of the Q flash is a bit niche though, and you’ll likely rarely use it.

That’s because you should be using this other version instead. While you can redirect the actual dash by pressing flash immediately, you can also just use Yone’s body to get a knock up as well. Basically, if you flash at any point during your dash, you will knock up everyone wherever you landed.

This is a great technique for potentially catching people off-guard and scoring easy kills.

Alright, let’s cover some tips and tricks, and there’s a lot of them. First, a
general laning tip is that Yone kind of likes it when his opponents push into him, so we’d recommend giving the push lead more often than not.

The reason being that Yone has crazy good gank follow up.

With his E’s gap closer into a 3rd Q, he can close the distance super easily, and CC his opponent to set up really easy ganks for his team.

let’s cover some unique interactions Yone has with his E. As you know, Yone has 5 seconds before he’s forcefully dragged back to his body.

if Zoe lands her bubble on Yone, as he gets drowsy, if he ports back to his body, then the de-buff just goes away.

Seeing as how Zoe’s main defense against melee champions is her bubble, Yone serves as a great lane match up into Zoe, being able to easily take a trade whenever he wants to.

The next weird interaction we found was with Skarner. His E should force Yone back to his body no matter what after 5 seconds.

But when Yone is ulted by Skarner, the duration actually extends until after Skarner’s ultimate wears off, and then he zooms back.

Which led us to believe something similar would happen with Camille and Mordekaiser.

If he presses E and is trapped by their ultimates, we thought he’d just wait them out and then dash back. But nope, both of their ultimates just force him to stop at their outer edges.

His E is definitely a weird ability and we’re sure there’s plenty of other wacky interactions out there.

Let us know in the comments below if you’ve found any other interesting ones. We’d love to hear them .

Now for all the efficiency nerds out there, Yone’s E is also an excellent tool when buying items. You obviously can’t E out of base, since you’ll just get dragged back. That being said, if you’re waiting on some gold for an item, then step out of your fountain, E back towards it, buy your item and dash back. Of course, that example wasn’t doing properly.

You shouldn’t stand on the center of the fountain, since your E has a travel time. Stand at the edge like this to really maximize how much time you’re saving by using this trick.

And lastly, Yone’s Q is a fairly long dash. We highly recommend going into the training tool and practicing which walls you can dash through.

He can actually go through some fairly thick walls at certain angles, and having these kind of tricks in your back pocket might end up saving you one day.

Let’s wrap this up with the build section. As always, just a small disclaimer, we did test out a ton of builds, but there’s no way to know for certain what will be best until thousands of players are spamming him every day.
For your skill order, you’ll want to max Q, then E, then W, and obviously put points in R at 6, 11 and 16.

For his rune page, there’s 2 main options you can choose to run: Press the Attack or Conqueror .

Most players will likely default to Conqueror as his main keystone, but we just don’t think it suits his play style that much. For most of the game, Yone will be looking to go in with his E, look for a burst trade, and then get out.

Since he’s not going to be in the thick of things too long, Conqueror won’t get full value on him. More importantly, it’s not like Yone need Conqueror to do damage.

If the enemy team is filled with beefy champions as well, then you should definitely be running Conqueror in those games.

Now when you’re against some poke heavy lanes, such as Syndra, Azir or Orianna, then we highly recommend Fleet Footwork. The added sustain is quite nice in these match ups.

Or, if you’re against something truly aggressive like a Lucian or Quinn in mid or top lane, then you can go all out on a defensive set-up with Fleet Footwork, Second Wind, and a Doran’s Shield for massive sustain.

Last bit about runes is that we’re aware of Hail of Blades as an option. It felt incredibly lackluster in testing, and Press the Attack just seems like the better aggressive choice over it.

As for items, he builds basically the same as Yasuo does. Pick up Berserker Greaves as your first item, then Phantom Dancer or Stattik Shiv if you’re looking to be more aggressive.

Afterwards, you don’t really need any more damage, so pick up situational defensive items based on what you need that specific game.

We also wouldn’t ever really recommend building Last Whisper. Thanks to Yone’s passive, he shouldn’t need it. That being said if the enemy team has like 3 or 4 tanks, and they’re just stacking armor, then by all means go ahead and build it.

when is yone coming out ?

That’s it for Yone’s champion guide ,for more guide about other games check New Rise of Kingdoms guide and Maplestory Link Skills Guide if you’re into one of those games .