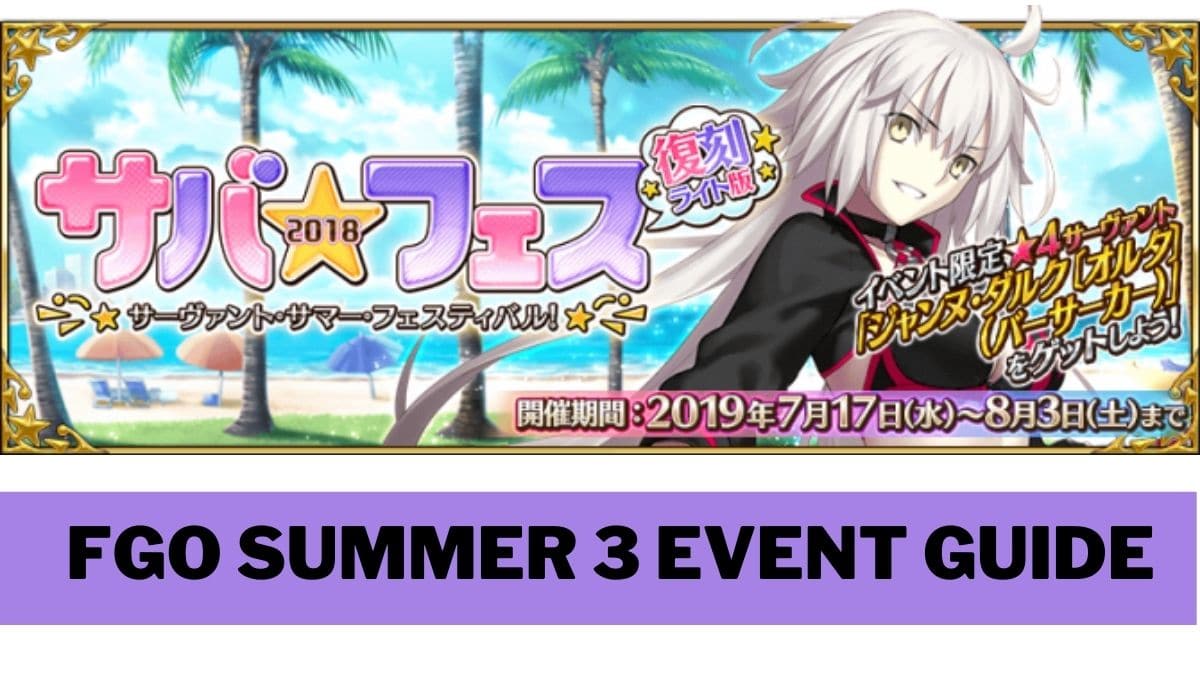 the long-awaited FGO summer 3 event this time around we’ll be spending our vacation attending a massive festival but like previous events there will be a lot to do however this time around things are going to be a bit more complicated so we’ll do our best to explain everything properly .

first thing is that in order to take part in this event you need to have completed the Fuyuki singularity i expect most of you have done this already but if not what the hell are you even doing here go back and complete it already .

scenario being first and three being second for both day and night when you’re on the main event screen there will be information displayed in the top left side that should help you keep track of what day and phase you’re on .

all of these points come together to make up your dojin’s circles total and after collecting enough more quests will be unlocked .

keep in mind that if you don’t have enough points in the dojin circle to unlock the next scenario quest then it’s skipped for that day .

if you don’t complete this time around you have another translator what i mean by that is you’re on a seven day cycle and after reaching the last day you’ll be looked back to day one .

in any case you’ll be able to loop indefinitely so gathering points shouldn’t be too much of an issue .

using the same three tabs of the shop you’ll be able to check exactly where you are for each point type .

the last three are used to purchase items from the shop and can be earned alongside points they are :

leading off the summer servants this year is sean alter she takes the star as a four-star berserker and will automatically be assisting with creating doujins alongside you .

the other servants who will be taking part in the summer festivities are :

alongside the servants are summer craft defenses as well remember that the names may vary due to translations but you should be able to connect the dots .

four starcraft essence increases buster card effectiveness by 8% increases normal phantasm strength by 8% and increases noble phantasm gain by 8% it also increases mimi dollar bill drops by one but can go up to two when max limit broken .

three star craft essence increases noble phantasm gained by 5% and increases critical strength by 5% ,it also increases gill dollar bill drops by one but can go up to two when max limit broken .

hero on the beach

five star craft essence increases buster card effectiveness by 10% increases critical strength by 10% .and you gain three critical stars per turn it also increases bb dollar build drones by one but can go up to two when max limit broken .

both set of craft essences are available on the Banner #3 as well so if you don’t get them on their initial banners you have another chance.

the next three are from the shop and will contribute greatly to your points farming .

it also increases doujin research drops by thirty percent but can go up to sixty percent when max limit broken .

well we know you won’t be able to cut it with just those craft essences so the other featured servants and i will be lending our support as well keep in mind that the current summer servants will be able to earn more points than previous ones but they can still help out regardless.

If you actually play your cards right set the right strategies up and take advantage of every opportunity then you should be able to get enough points to get everything you want and if your goal is to buy out the entire shop then you’ll need the following :

the key to unleashing Jeanne Alter full power is also there so pay attention and don’t miss out .

The fgo Summer 3 event have a new mystic code that’s released alongside the event, you can obtain it by completing the mystic code quest associated with it .

davinci mentioned should be comfortable to walk around in abilities are as follows :

of course the masters aren’t the only ones getting some new threads
Edmund Dantes, Cancer Gilgamesh and Robin Hood are getting spiritron dresses as well all the quests for these take place during the scenario phase as long as there isn’t a main scenario quest up at the same time.

these will be for the 40 ap nodes the lower ap nodes may have different enemy classes, remember that the 20 to 30 ap quests do not drop gold materials but all these nodes can drop phoenix feathers due to the appearance of vorpal chickens everywhere .

That’s it for FGO summer 3 event Guide guide ,for more guide about other games check Yone’s champion , New Rise of Kingdoms guide and Maplestory Link Skills Guide if you’re into one of those games .