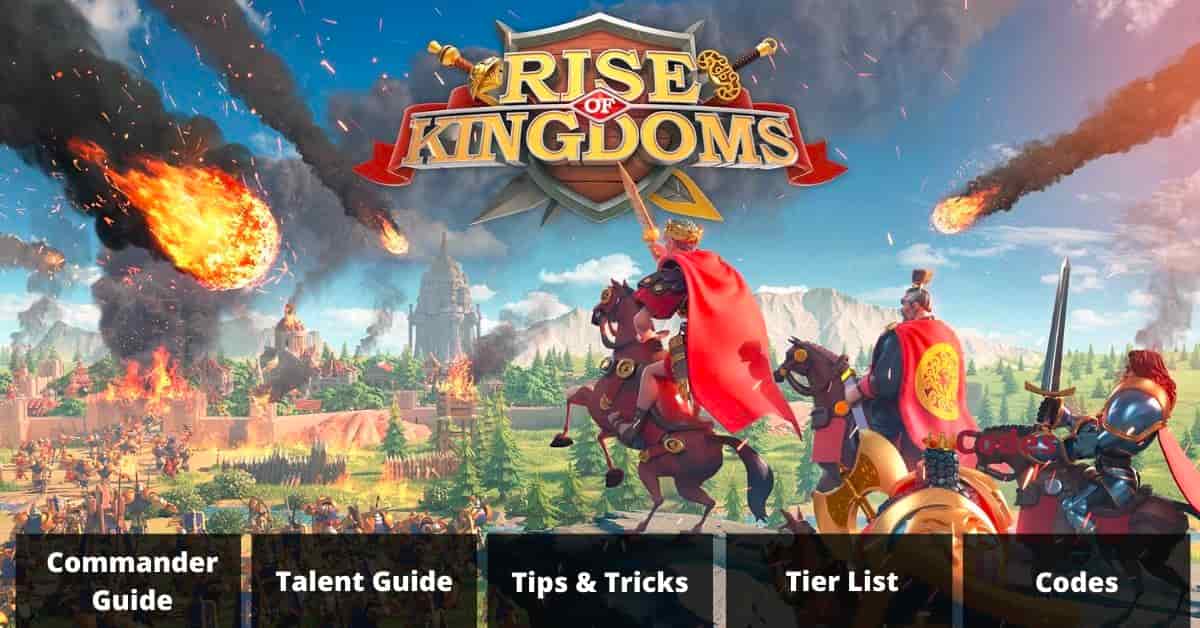 Rise of Kingdoms is an RTS (real-time strategy) mobile game. Players around the world play together in one of the many available kingdoms.

Whether you’re thinking of playing the game, just downloaded it, or still learning the ropes, you probably want to go the right path to achieve the ultimate city you’re hoping to have.

Learn how to find and combine the best commanders, calculate progress, talent builds and trees, redeem codes, and some tips and tricks to have excellent gaming experience.

Credit for the information on the commander’s tier list goes to Rok Guide.

Here are the Rise of Kingdoms’ latest working gift codes or redeem codes for you to have even a great time playing the game.

Copy them and read the guide below to learn how to use them and get a lot of valuable resources such as Gems, Golden Key, and Resource Tokens.

Note: The codes only work for new accounts that are less than 20 days old.

How to use Rise of Kingdoms Codes

There are a total of 45 Commanders in the game. With this, it is essential to learn the importance of investing your commander’s talent points in the right talents that will surely help you win the game.

Below are the best talent builds and trees for every commander.

Currently, the best meta commanders in the Rise of Kingdoms in ranking order are:

Among the ways to achieve a higher chance for winning battles in PvP as and PvE is through commander pairing.

All commanders in Rise Of Kingdoms have different roles and talents, making it essential to know what commander you will use as primary and secondary and what commander pairs have best synergies together.

You can find below the best commander pairings for field battles, destroying barbarian forts, defending, for a rally, and many more. Credit for this information goes to Rise of Kingdoms Guides.

Infantry commanders are easier to pair. It’s hard to choose wrong since they have related skills. However, still, they are commander pairs that have better synergy with skills and talent trees than other commander pairs.

In pairing archery commanders, you must be careful. Only pair those that have the best synergy with skills and talent tree. Otherwise, you will lose so much damage as well as survivability.

These are commanders with the best synergy with skills, talent tree, and bonus damage to barbarians forts. It is noteworthy to have the right talent tree build.

Below are commander pairings suited for defending flags, forts, and Ark of Osiris Objectives. They are great pairs against top tier rallying commanders.

Below are commander pairings suited for rallying flags, forts, and Ark of Osiris Objectives.  They have great synergy with skills and talent tree build.

Below are the best epic commander pairs that you can make, and they work great on new kingdoms.

In this way, it sets the upper limit for research that can be performed, determines how many troops can fit in hospitals, and many more.

Upgrading the city hall also increases the number of commanders/traders, which may be fielded simultaneously. It is also the primary factor in how many troops a commander may have in their army.

Credit for the information on the city hall requirements goes to Rok Guide.

You can get a lot of valuable rewards from the Era Breakthrough event by upgrading the City Hall. Among the rewards you can get are speedups, wood, and gold, which are used to scout people with higher scouting research unlocked.

Rise of Kingdoms Tips and Tricks

Here are some tips and tricks you can use to make the most out of playing Rise of Kingdoms.

Choosing a suitable nation to your playstyle is a crucial first step in playing the game.

Rome is suitable for active players who like to have an aggressive, attacking play style. For you to reach target locations faster than other nations, use the marching speed bonus.

Germany also rewards active players, especially to those who just started. Because of its bonus to action points, you will be able to kill many barbarians and level up your commanders much faster than other nations.

Britain can be a good option in an alliance with many troops because of its 20% bonus to ally garrison capacity. Sadly, the wood gathering bonus is a bit underwhelming, as you will then hold a dedicated resource gathering commander.

France is an excellent option for high-level play. Other troop health and a 10% healing speed bonus enable a more liberal approach to fighting and attacking in general.

Spain is suitable for resource farming thanks to its 10% troops load bonus; however, it offers very little about fighting. It still might be the right choice if you prefer to avoid combat.

China is also a top tier nation, having a focus on troops defenses and faster building and resource production speed. It might be the best overall option for active players.

Japan is the right choice for you if you enjoy commanding massive armies. It has a 5% bonus to troops training capacity and a 2% attack bonus, and the downside is a rather ineffective 30% scout march speed bonus.

Lastly, Korea has a bit of a sub-optimal combination of bonuses – 2% research speed bonus, 5% archer defense, and 10% hospital capacity don’t lend themselves in favor of any particular play style. However, Korean architecture is, without a doubt, the most beautiful nation in the game.

It would be better if you looked for the commanders whose sculptures usually get offered through the events and quests in the game.

Thus, it is suggested that F2P players should start with either Boudica or Scipio. Rok Guide says they are the best starting Epic Commanders for F2P players because:

After having the starting commander, you can change your civilization to Japan once you have gotten to City Hall level 10. Japan increases your scouting speed, the attack of all troops you have, and resource gathering speed.

What is a Zone?

The image above shows that there are three areas in 3 different colors:

The Green area is called Zone 1: There are 14 green dots in total. Each dot is called “Pass,” you must cross the Pass to enter the new Zone or other Zone.

Blue area is called Zone 2: 26 passes connect between Zones 1 and 3.

The middle purple area is Zone 3: Nine passes connect between Zone 2 and Zone 3.

Zone 1 is located at the edge of the Kingdom and is surrounded by mountains. When you first create a character in the new Kingdom, your city will spawn randomly around Zone 1.

This Zone is divided into six small areas. Level 1 Passes separate the areas from each other.

The Sanctum and Altar can be found in Zone 1.

Zone 2 is located between Zones 1 and 3.

In entering Zone 2, your Alliance must take control of a Level 2 Pass that connects to the area you want to access.

In order to bypass this requirement, the Alliance leader must pass their leadership temporarily to a trusted friend or a second account, leave the Alliance, and join the Alliance that controls a Level 2 Pass.

Afterward, they need to use a Targeted Teleport to transport to Zone 2, quit that Alliance and join the old Alliance. Lastly, the leader can build an Alliance Fortress inside Zone 2, allowing other Alliance members to move to Zone 2 through Territorial Teleport.

You will find better resources and stronger barbarians in Zone 2 than Zone 1.

In Zone 2, you can find Shrines.

Zone 3 is located in the center of the map.

This Zone holds the most precious resource potential in all of the Zones.

This Zone is also the most oppressive place to contest for entry due to its abundant resources and the area with the Lost Temple. Who controls the Lost Temple will be the King of that Kingdom, and of course, there will be many benefits to the King and his Alliance members. So it is the goal of every player and Alliance in the game.

The Lost Temple is always in the middle of Zone 3.

Thank you for reading and welcome to your journey as a growing Rise of Kingdoms player!