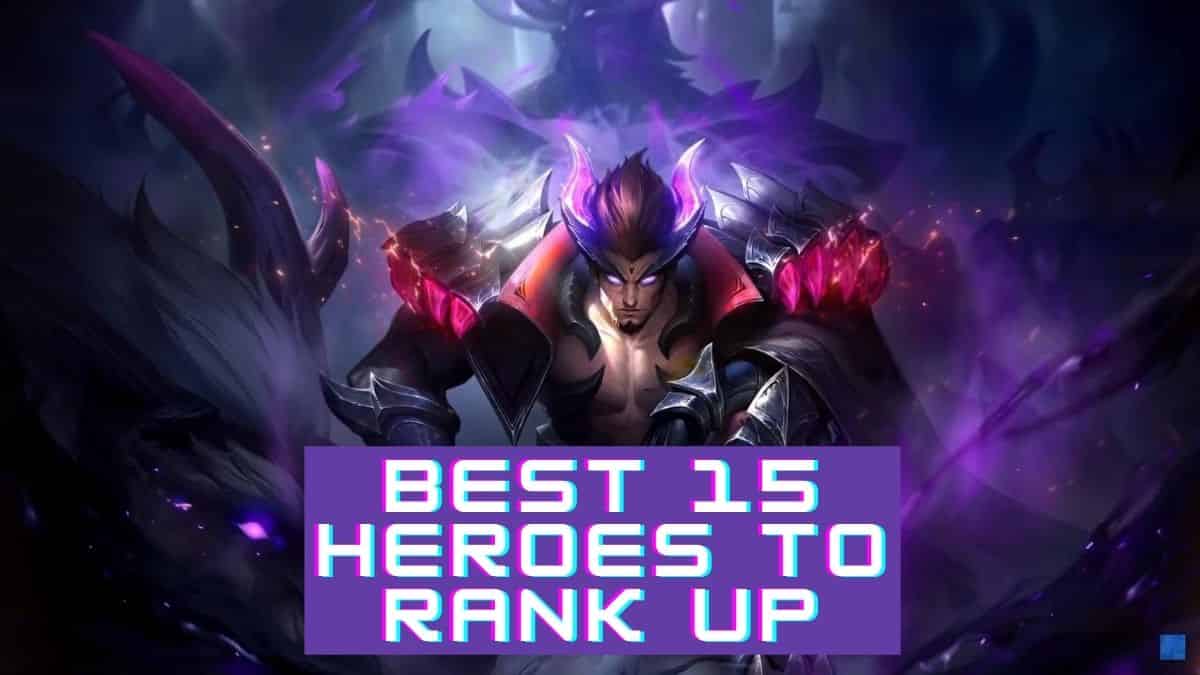 If you are curious about what are the best mobile legends heroes to use to rank up in this season, even for solo players here are the top best 15 heroes that you can use to rank up, and even carry in solo rank.

Yu Zhong is one of the best fighters in the current meta. He can sustain a lot of damage, has an excellent AoE skill, can escape easily, deal a decent amount of damage and can pretty much do it all.

So even if your team has no tank, you can use this hero and carry the game by yourself.

Jawhead is another excellent fighter for this meta. His burst damage makes him ideal for killing the enemy’s carry instantly. He can quickly chase the target and escape a dangerous situation thanks to his second skill.

If your team ever needs an offliner, he is one of the best candidates for that position.

Even though Hanzo got a little bit of a nerf, he is still a very deadly assassin.

Just remember to always ult from a safe distance, and try your best to keep stealing the enemy’s buff.

This would slow down the enemies farm by a lot, while at the same time you are growing stronger.

Ling is the worst enemy to all the squishy heroes. Once he gets his core items, the enemy’s carry would have a tough time trying to escape from him.

Even if your team is losing, because once it gets to the late game, he can instantly kill the enemy’s carry, giving your team a huge advantage.

Chou would always have a spot in whatever the meta is. He is extremely annoying, not the easiest to kill, if you know how to time his second skill properly, and can easily 1v1 any hero.

Even when the carry has one full item advantage over Chou, he can still easily one-shot the marksman.

Don’t let her appearance fools you. A lot of players underestimate this hero, but from my own experience, I can guarantee you that this cute looking mage is actually extremely deadly.

If you learn how to aim her ultimate and position yourself well during the team fights, she can destroy the whole enemy team from a very safe distance.

This alien is a nightmare for the enemy, especially when they don’t have heroes that can burst his turret down immediately.

The best way to combo with him is by having a lot of crowd control heroes, so his turret can do the rest of the damage.

But one of the most important things is his build, I have seen a lot of players building him incorrectly, which ends up turning him into a very mediocre hero.

Many players think Cecilion is not a good mage anymore because of how much mana he consumes and how long it takes to build up his passive.

But if you follow a good tutorial video, you can see that it doesn’t take long before his damage starts to instantly burst down the enemies.

Just make sure that you keep building up his passive right from the start, and try your best to not miss any opportunity to do so.

Granger is probably one of the favourite marksman of many players.

And there’s a reason for that. He is pretty fun, easy to use, and can deal with an insane amount of damage, even in the early game.

Just try your best to use his passive correctly and aim his ultimate properly.

Esmeralda is one of the most flexible mages in the current meta. She can be played in the middle lane or in the side lane.

She is so good because she is extremely hard to kill, can become almost immortal if there are many targets, and can jump into the enemy backline, creating chaos during the team fights.

Popol & Kupa is kind of like the marksman version of Esmeralda, in the sense that he is pretty flexible as well. You can use him as a marksman or support. Whichever role you want to use, he can excel at it.

Just keep a check on his doggo, so it doesn’t die, because, without him, this hero is pretty useless.

Even before she received the latest buff, she was already extremely scary. But now she is just a bully.

She is one of the few mages that can be played as a support and still deal with an insane amount of damage in the shortest period.

Just practice how to use her Yin and Yang properly, and the rest becomes easy.

People are banning Natalia less and less, but she is the definition of the assassin role.

When the enemies least expect it, she can instantly kill the squishy heroes and go back to hiding. But don’t confuse her early and mid to late game damage.

If you have been too busy trying to get kills and end up forgetting about her farm, then don’t expect to kill even a single fly.

After the revamp he received, he is officially part of the meta. His skillsets allow him to play more aggressively right from the start.

Just make sure you keep using his passive properly to inflict the maximum amount of damage in the shortest period.

Also, keep looking around the map when your team is engaged in a fight, and use your ultimate to provide support.

Last but not least, I decided to include a tank hero. Because believe it or not, this tank can do a lot even in solo rank. If you learn how to play very sneakily and always provide vision, this hero can carry to an extent.

His damage is not too bad, and he can sustain a lot. And the most important thing, he can counter a lot of heroes.

And that was it for the Mobile Legends heroes list.  A lot of players tend to forget to also pay attention to your own teammates, but there’s no point in landing the perfect ultimate if your team is not around.

Take advantage of the bush and charge your first skill while hiding in one of them.

One of the most important tips, when you play solo, Don’t become petty and waste time typing.